There is an enum attached to the Sequence named SequenceTiming. This enum controls which update loop the sequence will be run in.

* Note: SequenceTiming does not change the rate of time for the sequence. That is done by setting SequenceInstance.SequenceTimescale, which will be covered in the advanced section.

The Sequence.SequenceTiming enum has 4 states: Default, Update, FixedUpdate, and LateUpdate. Default will use Movement.DefaultSequenceTiming, which will be set to Update unless you change it. You will want to run most of your effects in the Update loop, but there are a few instances where you might want to use the FixedUpdate or LateUpdate loops instead.

FixedUpdate is for physics. If your effect is using AddForce, AddTorque, or any of their variants then you’ll want to use this timing.

LateUpdate is almost Update, but it’s run after all the regular Update effects have finished. LateUpdate is mostly used when you are controlling the camera, but it might also be used in situations like when a turret is tracking a target. The idea is that any time you are tracking or following a moving target you want to always be using it’s current position that frame in your calculations. You can’t always guarantee that whichever code is updating your target’s current position will execute before the current code block which is tracking your target’s position, unless you run the tracking code in LateUpdate.

It may not seem like a huge deal that you might be using the position from the last frame rather than the current frame, but keep in mind that if the processor gets tied up then the last frame could be 1/3 of a second old (or even longer if Time.maxDeltaTime has been changed in your project). If this was a turret then the user could cause the turret to shoot at the spot they were standing 1/3 of a second ago just by causing a framerate drop! If the camera is following an object on a slow computer 1/3 of a second could be long enough for the object to have left the screen entirely!

Some assets require a lengthy setup process in order to run properly in your scene, Movement over Time is not one of those assets. All that’s required in order to run an effect is to include the MovementEffects namespace, build a sequence, and call Movement.Run. However, you can achieve an additional level of control by knowing how the Movement and Timing objects work.

If you change nothing than the first time you call Movement.Run, the Movement object will either add itself to your EventSystem gameObject (if you have one in your scene) or to a new gameObject called “Movement Effects”. Movement is like a singleton, except that a singleton guarantees that there is only a single instance, whereas the Movement object guarantees that there is at least one instance. 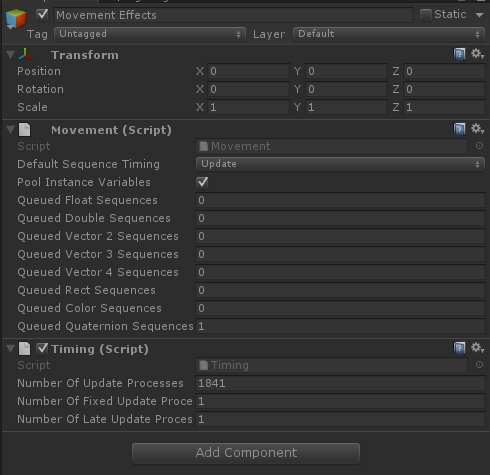 As you can see in the image on the right, the movement object does have two settings that you can change: Default Sequence Timing and Pool Instance Variables. If you change the default sequence timing then all new sequences that are initialized with their timing set to Default will use the value you select here. If you uncheck Pool Instance Variables then no new objects will be added to the instance pools. The rest of these values are for reference so you can see how the instance pools are being used. If you try to change them they will just change back again next tick.

There is an unpatched bug in the mono compiler that Unity runs on. It only shows itself when you try to reference the variable that you are iterating through in a for loop or a foreach loop, and when you are creating a closure in a lambda expression.

Lets see an example. Neither the for or the foreach blocks will execute like you expect them to:

Both loops are creating a closure. In the for loop “Waypoints[i]” creates a closure, and in the foreach loop “waypoint” creates a closure. A closure is ok to use in the RetrieveEnd field, since that is only executed once per effect. The trouble is that in both of these cases the item that ends up getting used is not the current item that you passed in, but instead every item will be set to the position of the last item in the list.

Fortunately, this bug only affects variables that are declared at the top of a for or foreach loop, so if you create the variable in any other way it will work fine. Here is one way that you can work around it:

Another way to avoid the bug is to convert your for loop into a while loop, like this:

You can’t create a SequenceInstance object directly, but every time you call Movement.Run one will be created for that particular running instance and returned to you. The SequenceInstance is a very powerful variable since it allows you to modify many of the fields that the effect is using while the effect is running.

There are two ways that you can address this issue:

There are a couple of ways to control the rate of time on your movement effects.

One very useful variable is SequenceInstance.Loop. So long as this boolean is set to true then the sequence will loop over to the first effect after reaching the last effect.

Demo #3 uses this line in order to create looping behavior:

Movement.Run returns the SequenceInstance. We don’t store the SequenceInstance in this case even though we could, we just change the Loop field to true. If nothing else was going on then this would create a sequence that would never end, but it doesn’t in this case because we’ve set Effect.ContinueIf so it can exit the sequence as soon as a variable is set to true. This is another way to run a sequence, it’s a bit like defining a while loop with while(true) and then putting a break statement in the loop somewhere.

Another way to use SequenceInstance.Loop would be to store the SequenceInstance object in some manager script and then set it to false from your manager script when something changed. This might be useful if, for example, you wanted to put some glittery sparkles around an important object in your scene. Once the user picked up the object you could simply set Loop to false. That way the sparkles would hang around for a little bit after you picked up the item rather than instantly going away.